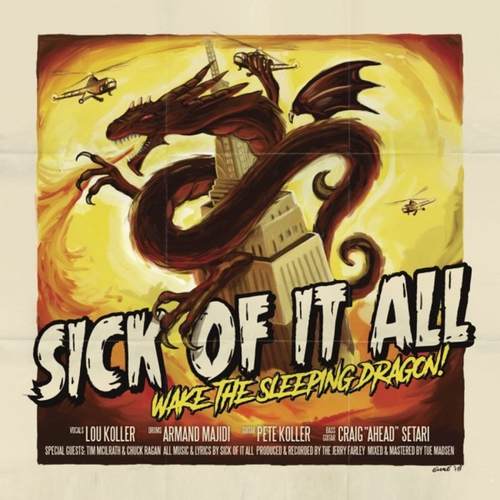 Label: Fat Wreck Chord New York City hardcore legends SICK OF IT ALL aren't slowing down with age; the long-standing quartet are still pissed off & have plenty to say, and remain a beacon of continuity, integrity, and resolve. Since forming in 1986, SICK OF IT ALL have traveled the world many times over, played in front of hundreds of thousands, and released 11 acclaimed full-length albums. Their latest Wake the Sleeping Dragon! is both riotous and anthemic. That SICK OF IT ALL continue to live by the standards in their original charter isn't a matter of course, it's part of their DNA. Hardcore is SICK OF IT ALL, and SICK OF IT ALL is Hardcore! As with their preceding albums, SICK OF IT ALL aren't afraid to cut the crap on Wake the Sleeping Dragon!. Guest Vocals by Tim McIlrath (Rise Against) and Chuck Ragan (Hot Water Music) Produced by The Jerry Farley (Lamb Of God, Every Time I Die) For fans of: Agnostic Front, Madball, Cro-Mags, Rise Against